Grow Through what you Go Through 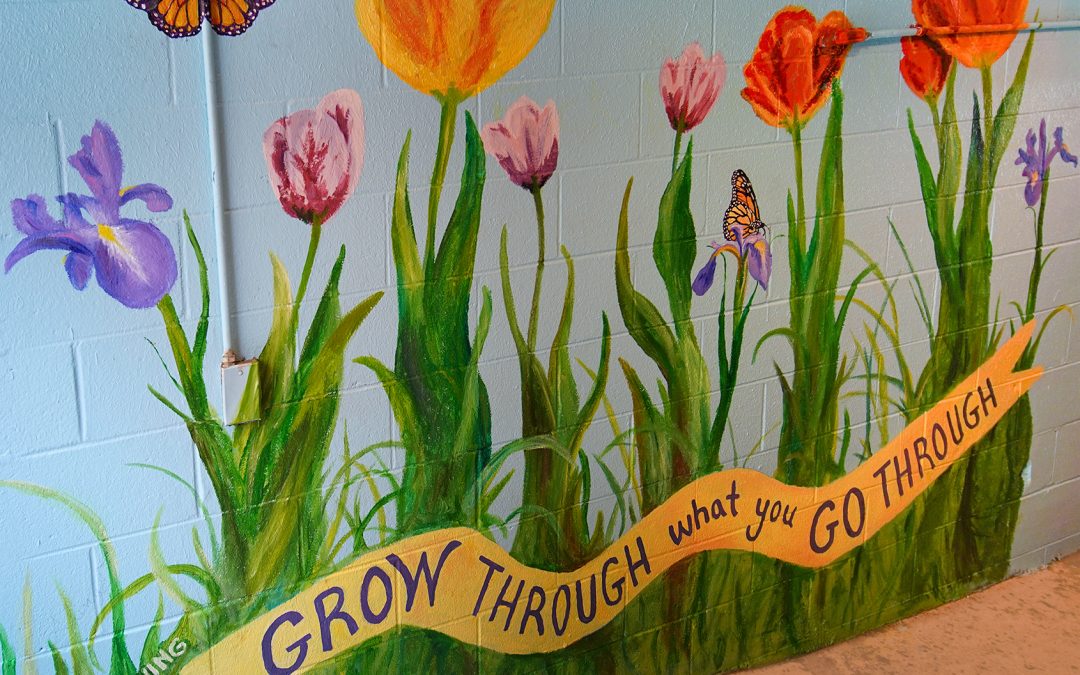 I recently was one of eleven artists selected to paint a mural in downtown Tallahassee as part of a beautification effort with the Downtown Improvement Authority for a historic area that is about a block from Florida’s capitol building. Gallie Alley is the section of passageways and courtyards located in the center of College Avenue between Monroe Street and Adams Commons. It has entrances in the 200 block of South Adams Street and the 100 block of East College Avenue. The alleyway was named for Gallie Hall, a former opera hall built in the 1870s on the corner of Jefferson and Adams during the Reconstruction era. It was an encouraging sign for the community during a time of economic hardship and social readjustment.

For almost four decades people connected to the cultural, social, and civic center of Gallie Hall. Over 100 professional performances, ranging from minstrel shows and musicals to comedies and Shakespearian plays, took place between 1874 and 1912. Galley Alley was originally a corridor for theatre patrons until Gallie Hall closed. Located in a bustling downtown area of Tallahassee, the alley later evolved into a delivery corridor served by horses and wagons and eventually trucks and vans.

This is not the first rejuvenation project for Gallie Alley. By the 1970s, it had considerable signs of use. The alley was finally paved with bricks in 1987 and a fountain was added to the courtyard through the Downtown Improvement Authority to increase its appeal as a place of retreat in this predominantly urban area. During the 1990s, it was used as the site of a weekly outdoor art gallery, which eventually evolved into the Downtown Market, now held on Saturday mornings on Park Avenue. Used primarily as a shortcut by foot nowadays, Gallie Alley became the target of graffiti, leading to the Downtown Improvement Authority’s latest beautification effort to commission local artists to transform the space.

The creative brief requested uplifting messages and once I saw that the location was a passageway, I knew exactly the message I wanted to contribute.

“Grow through what you go through.”

This not only has served as a mantra for moving through challenging times, but in a way it served as a helpful reminder for me as well during the act of painting these words for this mural. I had been so focused on my recovery, that a full year had gone by since the last time I picked up a paintbrush. Part of me questioned whether I would be able to focus enough to produce something of merit when placed in an environment with several former triggers.

However, those kinds of thoughts are fear-based. They come from an area of the brain that has a primary mission to survive, protect, and promote a sense of security. When we spend an extended amount of time in situations that test our comfort, or perhaps are raised in environments where that sense of security does not develop as is intended, we can become hypervigilant to change and our limbic system can overfire its protective mechanisms with anxiety or other related conditions. The key then is to use the “higher brain” or Neo-cortex to effectively discern the messages sent by the Mammalian brain (limbic system). Our limbic system is meant to alert us but it’s not meant to unanimously guide us in all situations—only those that warrant the level of protection it wants to provide. I obviously didn’t listen to that voice that told me I couldn’t. I chose to believe I was equipped with all the skill and drive I needed to complete this task. I also felt compelled by the potential to inspire others who may be struggling. The ambiguity of the quote is meant to apply to any challenge or opportunity that has the potential to also support personal growth and development.

My limbic system was also alerting to the memory of past challenges, such as Multiple Chemical Sensitivity, Claustrophobia, Cleithrophobia, and Agoraphobia, not to mention the mental impacts of quarantine and the opportunity to be within close proximity with people again. It’s strange how seemingly “normal” things can become sources of anxiety but that also goes to show how adaptable or “plastic” our brains are where they can be imprinted by events. Through neural-retraining and a practice of discerning my thoughts, I can tell when the unease is limbicly-based or an over exaggeration, and when it is a choice grounded in my prefrontal cortex, that curious part of me that can observe without an emotional layer to the experience. Some people refer to it as the rational mind, but the issue I have with that phrase is, when you’re in a limbic state, what is considered “irrational” very much feels rational—because it is based on reality, however, the timelines are blurred. What was true of the past is not necessarily true for the present or the future. That’s how you get back to the prefrontal cortex when assessing limbic thoughts. You learn to see how it’s a false message and not 100% true for present or potential circumstances. That gives space for growth and change.

There’s that word again—growth. This is only a facet of the concept behind the work. The imagery paired with the quote is also very symbolic. My original concept was just focused on the flowers, but evolved on my second day of painting where I decided to also pay homage to the community of neural-retainers who are of huge support and inspiration to me personally. The monarch butterflies are a tribute to them and this metamorphosis we undergo through the act of focusing inward on ourselves, so that we may emerge with the traits we desire for ourselves. As all butterflies undergo metamorphosis, I chose the monarch specifically for its journey of resilience. 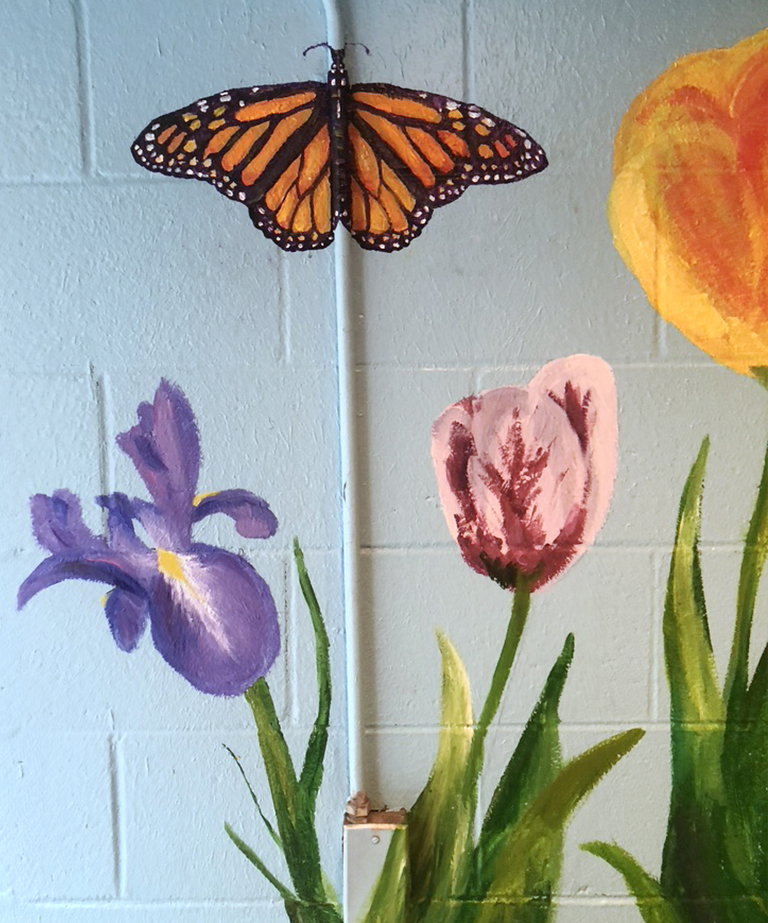 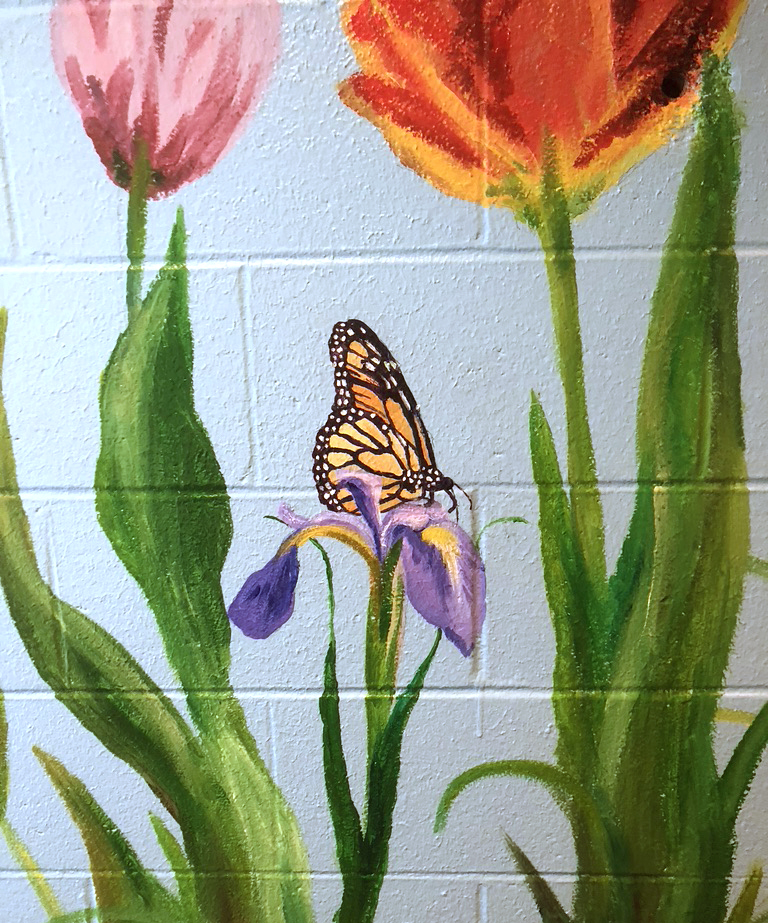 Each year, monarch butterflies begin their southern migration from September to October. Nearly 500,000 monarchs from the eastern and northeastern populations migrate at this time. They originate in southern Canada and the United States and travel to overwintering sites in central Mexico.  The butterflies arrive at their roosting sites in November where they remain during the winter months and begin their northern migration in March. Although no individual butterfly completes the entire round trip, during the northward migration, the female monarchs lay eggs for the subsequent generation; four generations are involved in the annual cycle.

The monarch butterflies in my mural are seen interacting with the flowers. All components of the mural are rendered much larger than life to give an immersive experience where the viewer can feel to scale with the elements, as if they are a flower growing among them, too. For the flowers, I chose tulips initially out of instinct, later researching that the tulips I selected were actually varieties of “triumph tulips”. Tulips are one of the first flowers to bloom in the spring and are said to signify rebirth. As a native New Yorker, they remind me of my experience of spring though they are more of a rarity in Florida because the bulbs really seem to thrive after undergoing winter. In Florida where winter is more mild, they tend to be annual flowers instead of perennials. Included with the paintings of the tulips are irises which are one of the bulb varieties that do thrive in much of Florida. Irises are traditionally a symbol of hope and valor. The concept to use natural imagery to evoke my concept is one that connects to my own work as an artist. Nature has always served as a great source for passion and inspiration. Aside from that, the theraurpeutic benefits of nature, forest bathing, or experiencing a season of growth such as springtime after a more dormant period are undeniable. I wanted to offer an “evergreen” or non-ephemeral spring experience to the community through this mural.

It is my hope that this mural serves as a beacon of hope for all those who pass it. 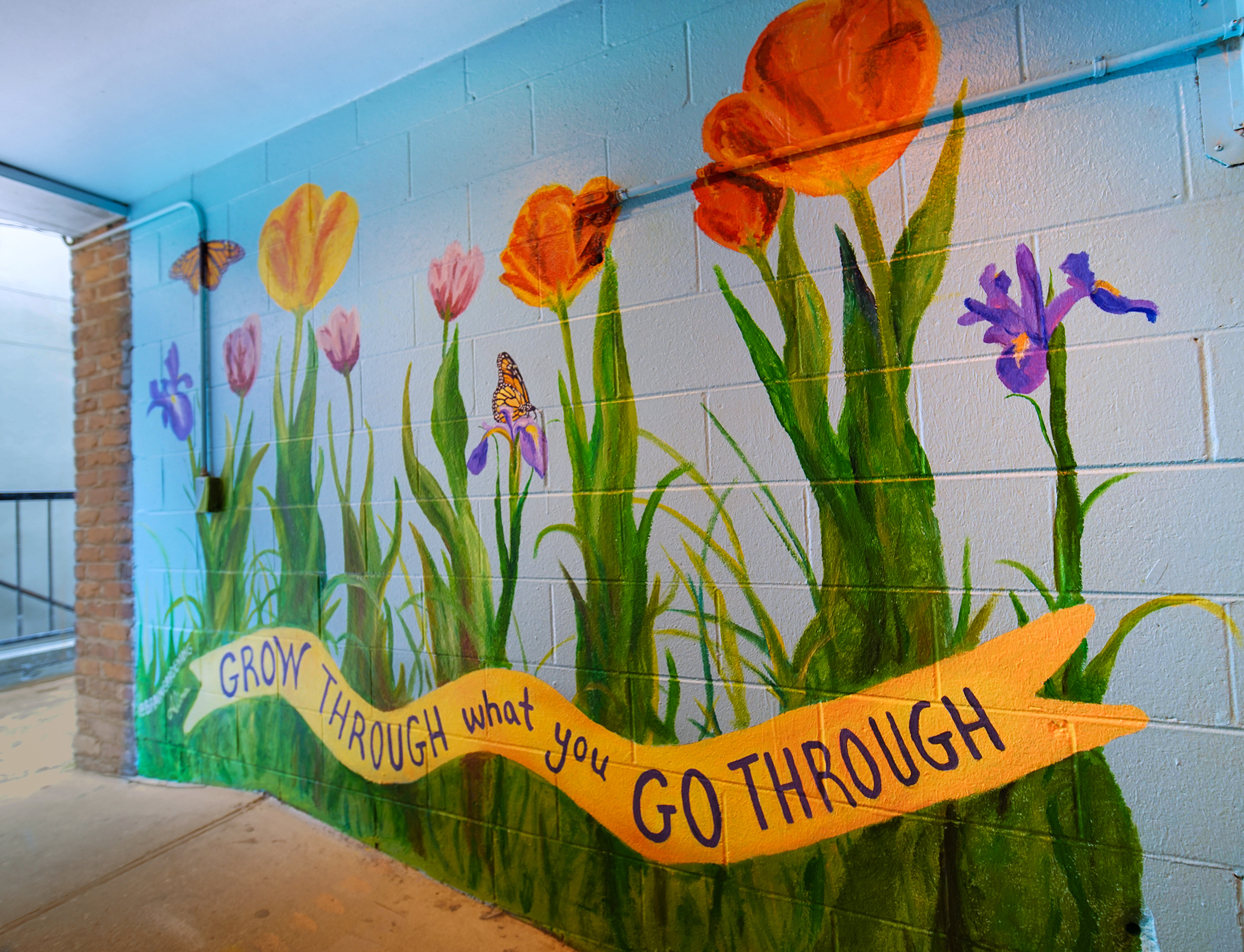 A neuroplasticity-based coloring book inspired by my mural is in development and will be available in Spring 2021 in the Brain Gardening shop. Please subscribe to our mailing list to stay informed.